Home The World Around Us The Death of a Hero or a Despot?

It is with some amazement that today I find my Facebook swamped with commentary on the death of Maggie Thatcher. 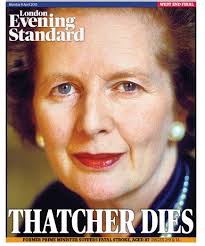 Politicians die on a daily basis, however I have never before on facebook seen so much naked hatred or avid adulation voiced over the death of a politician. Quite scary to be honest. And it comes from varied and in some cases unexpected sources. And not just from the UK.

And the alarming thing that hit me most was the strength of feeling being expressed so many years after Maggie Thatcher retired from politics.

There were however many who spoke with naked emotion about the impact Maggie Thatchers policies had on their lives. Its a mixed bag. Both those that truly felt disenfranchised and ruined; and those whose lives were improved by her policies.

I have never been known for having left wing political leanings. Quite the opposite! At one point I became treasurer of a division of the Australian Liberal party. However, remarkably, my political tendencies never seemed to attract friends of a similar political persuasion. On the contrary. At one Liberal party fund raiser I was only able to cobble together a table that consisted of staunch labour supporters and trade union leaders, who came along because I assured them they would not have to part with any cash and that they would of course be able to enjoy the delights of my gay repartee and bonhomie!! An effort that was subsequently gleefully reported in the local media (under the headline “Labour faithful clean up at Liberal fund raiser” or something similar) after our table won the quiz night and various other associated prizes. Well actually we came second – but with intent. Because no one at our table could contemplate or stomach the thought of dinner for 6 with Doug Shave (a local Liberal MP). Whilst the case of wine on offer for second place was much more to our liking!

These misguided left wing leaning friends have oft likened me to Ghengis Khan or some other likely dictators of historical repute. One friend even had the temerity to give me a book on Prussian administration in the believe that my people management skills were crafted along similar lines. Never, I must say, did I have the slur – or honour – to be cast in the image of Maggie Thatcher. Either she wasnt dictatorial enough or right wing enough for me to be compared with ….. who knows.

To be quite honest, I have always considered my political leanings to be to the left end of the right wing political spectrum with a strong belief in social justice couple with the balancing creed that anyone who is physically and mentally able should make their own way in life and not be supported by the state.

In Australian politics the labour party at one stage had the goal to have 25% of the electorate employed by the government and 25% on social security which they then believed would assure them re-election. A cynical political agenda with no benefit for the country. Agendas such as those from either end of the political spectrum garner nothing but scorn in my book.

But back to the subject topic.

Whether we think Maggie Thatcher did a good job or a bad job; whether we agreed with her policies or disagreed. Regardless, she is due some respect in death, especially as it is now 20 years since she left politics and public office; and in that time both sides of politics have had more than adequate opportunity to correct whatever wrongs she did. However according to a number of postings her legacies still live on today. This must perhaps either be because she did some good; or perhaps those that followed did not have the courage of their convictions. Something which can never be said of Maggie Thatcher!

And never forget the British electorate re-elected her 3 times over 11 years with sweeping majorities each time.

To those churlish enough to wish her ill will at her passing, I can only say that I hope you have lived a perfect life and that your hypocrisy will not come back to haunt you one day. It is not without reason that there is an ancient and oft repeated saying “speak no ill of the dead”.

It seems that the immortal words of William Shakespeare’s Mark Anthony are perhaps an appropriate note on which to end this particular blog.

Friends, Romans, countrymen, lend me your ears; I come to bury Caesar, not to praise him. The evil that men do lives after them; The good is oft interred with their bones; So let it be with Caesar. The noble Brutus Hath told you Caesar was ambitious: If it were so, it was a grievous fault, And grievously hath Caesar answer’d it. Here, under leave of Brutus and the rest– For Brutus is an honorable man; So are they all, all honorable men– Come I to speak in Caesar’s funeral. He was my friend, faithful and just to me: But Brutus says he was ambitious; And Brutus is an honorable man. He hath brought many captives home to Rome; Whose ransoms did the general coffers fill: Did this in Caesar seem ambitious? When that the poor have cried, Caesar hath wept: Ambition should be made of sterner stuff: Yet Brutus says he was ambitious; And Brutus is an honorable man.
You all did see that on the Lupercal. I thrice presented him a kingly crown, Which he did thrice refuse: was this ambition? Yet Brutus says he was ambitious; And, sure, he is an honorable man. I speak not to disprove what Brutus spoke, But here I am to speak what I do know. You all did love him once, not without cause: What cause withholds you then, to mourn for him? O judgment! thou art fled to brutish beasts, And men have lost their reason. Bear with me; My heart is in the coffin there with Caesar, And I must pause till it come back to me. (3.2.74-108)