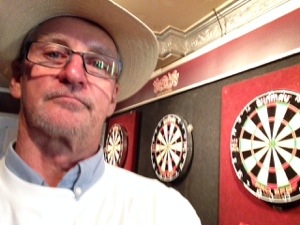 Well it finally kicked off last night after months of assiduous, single handed preparation and planning by Ismo! (We are still trying to figure out how, as a full time employee and husband, he has the time and energy for such extracurricular planning activities!! Rumour has it that he is not always as busy as he would have us believe!! Of course that can’t be true!! SMILE!!). Great job Ismo!!

Now I have no idea who won what or by how much, however last night was proof that miracles do happen!!

I have never won a game of serious darts in my life! And everyone knows (as I’m frequently reminded) that I’m only there for the drinks and the bon homie!

I therefore had little to be disappointed about when my first match was against Davie Graham. Naturally I foresaw a quick match and a sound thrashing! And that’s pretty much what I got, despite Davie being jet lagged and not on peak form!!

Thinking that was me done with darts for the evening, I increased my beer consumption. And was even forced into a round of Salmiaki. Now for those of you not familiar with Salmiaki, it is a foul Finnish liqueur, which is completely un drinkable without at least one, if not 2, beer chasers. A while later we then managed a B52 round to restore the taste buds to some level of normality!!

So having embarked on serious revelry, I was less than impressed that I had to play yet another darts match, this time against Jussi! In asking around about Jussi’s darts skills, I was told he can be very good. Another quick match and then back to some beers I thought!!

The match started with 501 and, true to form, I was soon some 200 points behind while Jussi was on doubles. While Jussi was struggling with the right doubles throwing technique, I surprisingly threw a 70 followed by a 56. Hmmm. My average throw is below 20! Amazingly both Jussi and I ended up needing 5 to close; and many throws later we still both needed 5 to close (reminisce of the great x1 contest that Veera participated in many years ago at the Irish Pub (Dirty Nellies?) in Beijing) . This was when the first miracle happen. I stepped forward and threw my first dart with my normal casual aplomb – aiming for 3. It hit 1 instead (for those of you unfamiliar with the number positions on a darts board, 3 is at the bottom and 1 is at the top!!!) – Random as always. Well that’s Ok I thought. Just double 2 left! Not much hope there. I better “bust” (ie get a number higher than 3) I thought. So having aimed for the 8, 16, 7, 19 3 17 area of the board, you can imagine my amazement when my dart landed squarely in double 2. Yay!! A win! Even though thoroughly undeserved!!

Matches were mandated as the best of 3 games with the second game designated as Mickey Mouse. Now random darts throwing such as mine can sometimes fluke a win in 501 as i had just proven, but Mickey Mouse requires number accuracy which is well beyond my darts skill set! Now for the humiliation I thought; and still another two games to end the torture.

Recalling the exact detail of this remarkable game is blurry now, however I some how managed to get the requisite 3 bulls early on and plodded my way through the numbers with random darts fluking into scoring numbers that were not aimed for. Meanwhile Jussi was scoring on 20s and 19s. Let’s hope this ends soon I thought. Then another miracle happened. I threw a triple 20 (I can never hit 20 let alone triple 20). I then somehow managed to follow it with 2×19 and this shut down Jussi’s scoring options. On looking at the score board I realised that I was closed on everything (unheard of) but 79 points behind! And that Jussi had still not closed bulls or 15s. It was at this point that I actually thought “I may win this”. My next throw I jagged a triple 15 followed by a 15. 60 points scored. No progress from Jussi – 15s still open. My next throw included a 15. 75 points in total! Only 4 points behind. It was about this moment that I realised I was about to win. Jussi still require 1×15 and 3 bulls. And so it transpired I scored my final 15 to win the game and the match!!!

There was a hushed silence and gaping mouths as some people realised the enormity of what had just happened. For others like Ismo it was so beyond belief that they weren’t able absorb the reality!! Even Jussi seemed as stunned as I by the outcome!

Now this morning I am wondering if it wasn’t all a dream!

If it really wasn’t a dream and this tale is actually grounded in reality then the moral of this rather lengthy post is “yes, miracles do happen when you least expect them”

Don’t Leave It Until It’s Too Late